So I have decided that every week I will revies one to two companies that either sells product just as a retailer or produces their own mini lines. This will become and annual thing and people all of the companies I review I order from. I do this to provide to you my readers an unbiased view and maybe help direct you to some good purchases OR help you avoid bad ones. 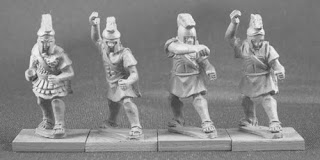 To kick off we will start with Gorgon Studios. Recently I ordered from them and though I only dropped 40 bucks I was extremely happy with my purchases. To start off I think their sculptor Steve Saleh is just tops and I am a HUGE fan of his hands down. Some of you may have seen his work on gripping beast or any other countless places as he does a lot for all of the major companies out there. I decided to order some of Gorgon sexy Early Estruscans. For those of you not too in the knowledge of history the early etruscans where the inhabitants of italy in the early years of the latin confederation which would in turn become ROME!!!
Now their models are equisit, and I have to say their pacakging and shipping policies should be adopted by everyone out there as they were communitative all the way through and even sent me some extras(wink thanks Hank). their main painter is 9 time demon winner Dave Pauwles(sorry if I misspelled your last name) and let me just say he does these models true justice. Now I wouldn't be honest if I didn't point out their short commings so I would say their are two major ones but one of which will be remidied in time.
The first is their lack in playable lines. Yes these models can be matched up with other companies for historical games but let me just say us historical gamers don't like to mix and match. We like everything to be the same and consistant across the battlefield. Now these guys are pumping out models on the fast side so I think being this is their first year they are doing pretty damn well. With several AMAZING one offs and solid core units for a possible 3 different lines I say this company is on the rise.
the second shortfall is the price sad to say. Coming in just over an average $2.00 a fig these guys don't play around. You are getting a quality product and yes I know costs are up for everyone now adays but I think if they drop it by a quater a fig then they will increase sales Exponentially. Now I have created a points system that ranges out of 5. I judge shipping, costs overall, communication, and well how overall I think they are and if I would buy from them again. Comming in at a 4 pt 0 this company is HAWT!! I feel their flaws with lack of fully playable lines will be fixed very soon but the price is what hit me the hardest. As such I just dropped a star for the price and nothing for the playability. All in all I highly recommend these guys for anyone interested in ancients of just quality models.

Chapterhouse Studios: Well I have one good thing to say about these guys, and that is the fact they have some cool new products hiting the shelfs. Their customer service is horrible and their shipping takes over a month(and they are stateside). When I contacted their owner he told me I would get the stuff within two weeks.. that was 5 weeks ago. I then made a second purchase just to see if this was a pre-order fluke and that was 3 weeks ago and no product... For something they even claimed to have in stock. As such I plan to never waste money again with these guys and after a easy write up I give them 1 star. This is overly generous of me as well Nick is distastefully rude, takes him time to email you back, shipping is slower then me walking to china, and in the end the price is not worht all of this hassle. Once more they only make products that fit to GW stuff so sooner or later the famous GW IP fairy will shut them down. So in my opinon this company goeson my DO NOT SHOP AT LIST!!!!!

Well I hoped you all enjoyed the reviews and if you know of a company you want me to check out then shoot me an email at alexanderakers at yahoo dot com.
Posted by AkersMinis at 6:24 PM