To Infinity and ADEPTICON!!!!!!

Ok so sorry for being so long between posts. For those of you who don't know I am organizing a charity warhammer 40k/warhammer fantasy tourney for here in boston for may of 2010 called the Boston Brawl. This will become a fixture for a tourney so hopefully one of these years you can make it out:). Also my wedding is in less then 30 days s cheers to that:). Now on to the pics. Recently I started collecting Infinity figs as well they are cool as sin. Here is my first one for my army who is still WIP but hope you all like him. 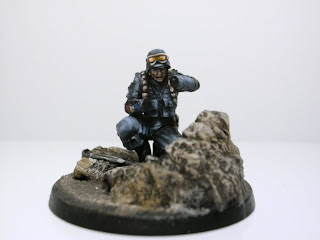 Here is a front view of the sapper. I decided to go with orange for goggles, as I felt they would help the face standout. I still may redo the face, but all around I like were the model is heading. 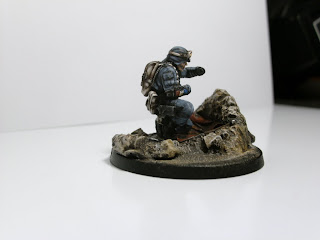 A side view so you can see the little french flag I painted on him. 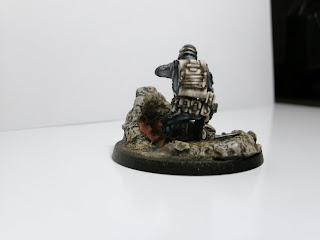 Back view to show off the web gear.

Next we have my traitor gaurd stormtroopers for adepticon. I used green, and grey stuff to add shoulder/knee pads as well as create a smoother link from their masks to their packs. I used IG flamer ends cut off and shaved down for the barrels. Hope you enjoy. 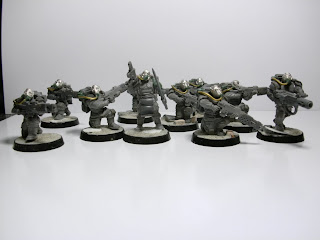 This is the first of what will be 2 tanks for the army at adepticon(SPOILER ALERT). I am by no means an expert at weathering, but I figure nows as good a time to learn as any. I painted the model then used liquid mask found at any art supplies store(about 5 bucks a bottle) in splochy(ya totally misspelled) patches on the model. Once dried I painted over and when complete with the layering I rubbed YES rubbed off the liquid mask and painted in Mithril silver into those spots. I then used weathering powders I bought from AwsomePaintJob.com . Cheers all! 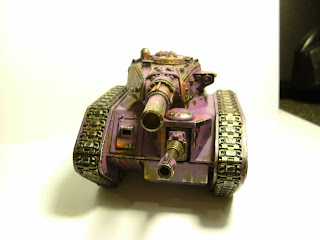 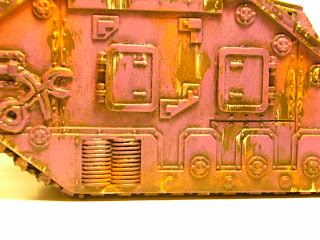 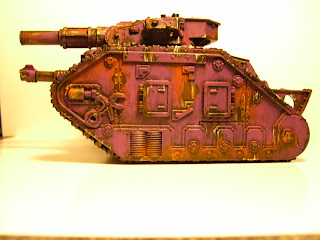 As usual any comments good or bad appriciated. Hope you enjoyed and I will update you all further next week I promise.
Posted by AkersMinis at 6:53 PM No comments:

Tournements and why we love them:)_

So I figured it has been a little bit of time, and I have been busier then I have been in months. This is both a pro and con as it leaves me little time to post updates, but it makes time fly by. Well I thought I would take this time to chat about Tournements and why it is we as gamers young and old love them like we do. This topic is being brought around because I have of coarse been working on my own indy GT for May, but also working on my armies for Adepticon, and Astronomicon.

To start I personally find the tourney scene fun as heck because it is usually a garunteed amount of games that I get against people I am not used to playing. This brings about the social aspect which a lot of gamers are into more then the actual game. Anywhere you look people like to congregate together and chat about similar intrests and it enforces the "Community" in everyone. Now for some of you readers you will get what I am talking about but for others it comes down to competition.

The competative side of tourneys can like anything else be rather nastey in and of itself. This is shown recently as Conquest North West were the winner(not naming names) was caught on camera cheating. His title was revoked, and thankfully he did not get the coveted golden ticket to the Las Vegas GT, but he raised a lot of awareness as to the lengths at which some people will go just to win. This rather saddens me because it brings to light those so called golden demon winners who did not actually paint their entries. I ask you the reader is winning the trophey our rights to say yoru the winner worth it if it wasn't actually earned? Personally I don't think it is as this is not just a hobby but a passion for me and I love to embrace all aspects. This leads into the final part of this disscussion, Modeling.

Yes I know sportsmanship is another topic, but i really don't want to head down that road at this time. I do however want to discuss why some people go to tournies in the fact of modeling/painting. I know most people will spend 3-6 months on average working on an army night in and out just in the hopes of taking that coveted trophey and I applaud these people. Even if they didn't win the next day they will be back at it comming up with a cool new idea just for the next time, and because of this they will learn new techniques to improve their selfs and I think that is really what this is about. I love seeing at tournies the dedication somone has put into an army because to me it shows their passion for the game, and I feel a common intrest with them. Most gamers will love to have pictures and talk up their army because well they earned it.

In conclusion whatever your reason for going to tournies it comes down to common intrest. We all love these hobbies otherwise we wouldn't do them. As such we want to show off the fruits of our labour with others and for that I say "LET THE DICE FLY"
Posted by AkersMinis at 11:14 AM No comments: