Alrighty well it has been a crazy few weeks to say the least. Lost the job, my car decided to die on me.. and tons of other stuff but thats ok because when it rains it poors, but after the rain is a beautifull day. Now with all of that said I have been extremely busy as of late. I have been working on a south african boer war commission(pics later this week) as well as my fantasy army and 40k pre-heresy army (built by davetaylor. To say the least add in my romans have arrived from warlord, and I have a brigade(over 200) of seven years war hannoverians to do soon so busy bench... But without further adu here are some pics. Please remember I suck at photography but I hope to improve so any tips welcome on it. 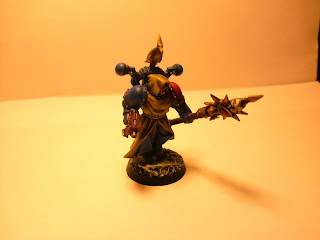 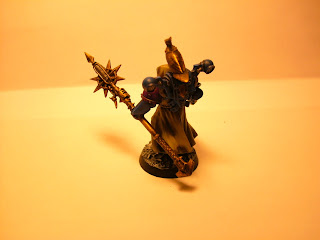 First off is my space marine pre-heresy librarian. Now I run my pre-emp children as slaanesh chaos space marines(as any devot follower would) so he is actually a sorcerer( killed vulkan he'stan without even batting an eyelash). 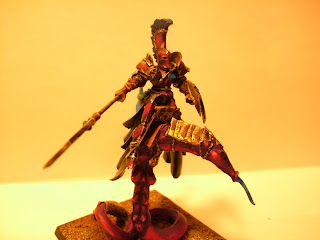 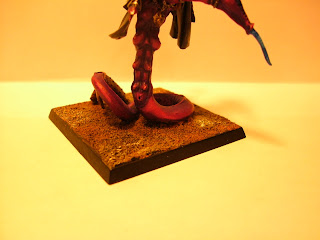 Now this fella was a blast to paint. He is of course my Slaanesh lord on steed for my WHFB army. I did not like the eyes or the fins but overall it was fun and he is much better in person then on camera. 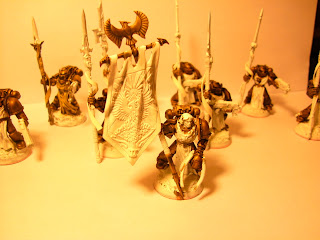 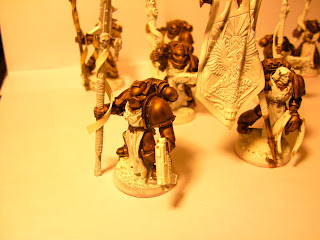 Now these guys aren't adeptus custodes(someday I hope though), they are fulgrims finest and personal body... thats right the pheonix gaurds themselves take to the field for me. I run them as chosen. Still very WIP but hey why not. 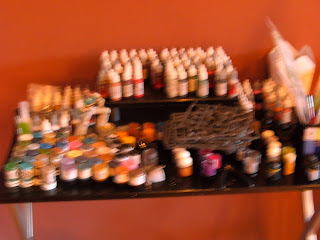 Finally I leave you all with pics of my re-organized my paint desk and cleared out my old paints that had dried out(over 50), as well as since some people were emailing me and a few wondered what I look like heres a pic of yours truely in front of a mobile satellite terminal I work with. So with that I say to you all keep painting, and a fast shout out to Chris Borer who just launched his own personal website http://www.fullborerminiatures.com/ . Let me say his work is amazing and for those of you who don't know who he is CRAWL OUT OF THE ROCK YOU ARE UNDER!!!
Posted by AkersMinis at 5:12 PM 2 comments:

Greetings one and all I am dropping this post so you all know I am alive and kicking. This past week since getting back from annual trainging has bee a tough one. Due to budget cuts in the Gov't I have been laid off. As such I was not willing to rish starting my own company at this time as I needed to make sure that money went to keeping my family afloat for the next few months. So with that said I am now accepting even MORE commissions. Here are my baseline prices people their is no negoitiation on these so please don't attempt to stiff me.

I also charge $1.50 per base if you want me to base your models. REpeat customers get discounts(since well they are repeats). If you are interested or know anyone who is please email me at alexanderakers at yahoo dot com.
Posted by AkersMinis at 6:33 AM No comments: