Alrighty so it has been a while since the last post but I thought I would kick off a few more posts over the next few days with pictures from the Boston Brawlcon 2011. This was one of the closest tournies I have honestly ever run and being that I have done well over 50 events that says a lot. Well with that onto the winners pictures!!! 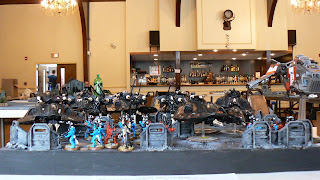 This was our Best Sports army Tom Greene. Really nice guy and a well deserved trophey as he always had a smile on his face during the whole weekend. 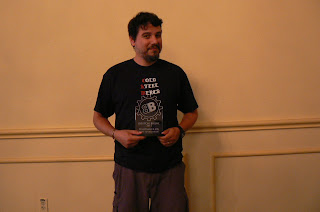 Here's his winners picture with the trophey!!! 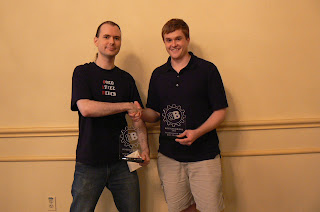 On the Right we have our overall winner Ben Molie. Ben won no less then $2000 in prizes to include a plane ticket to Chicago for Adepticon 2012 to compete there and to go with it a 2000pts army to match. This was just the prize support from Battleroad Games and Hobbies, and Ben gets even more via Games Workshop...wow is all I can say. Not to mention that Ben is also the Captain of Team America and will be competing at worlds later on in Switzerland!!!!! On the left we have our 2nd place winner, and Best General to include our first ever Volunteer of the year award. He goes by the name Ragnar Arneson and let me just say he is one top notch player and person to boot. Earlier last month he won best Chaos Space Marine General at the Throne of Skulls held by GW in Vegas! Literally the overall and second place was decided by 1 point and came from a last minute favorite players vote. Ben being a gentlemen to of note is sharing some of his winnings with Ragnar and that too me says a lot:). 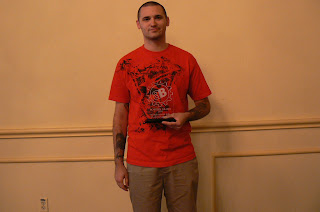 Next up we have Bill Souza for players choice. Let me just say this fella has one HELL of a converted demon army and it was no suprise that he secured the players choice with no less then 15 votes!!! I am only too sad that some of the pictures of his army didn't come out so well in the end but what I do have I know will put you all in awww. Bill also took a Silver in our Open format painting comp for a lovely changling. I look forward to seeing what bill presents next year for the brawl as I know it will be something to take notice. 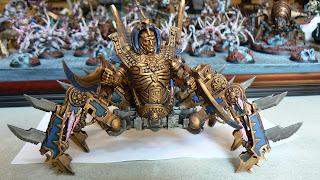 Here's the only picture I could get to work so if anyone has others of his lovely army please pm me! 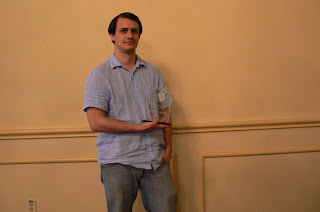 Here we have Simon Leen and let me just say his army was one too take notice. He had tons of lovely well done free hand over his whole sisters of battle army and it really helped catapult him to the top in the end. I had 4 armies that we in my favorites and in the end it was the averages between the two judges that settled who the winner was. 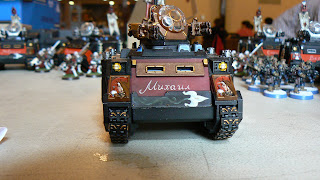 Well I will post more in the comming days and hopefully I will get off my ass and post more. With that keep painting and thank you too all of the players this year for a great Boston Brawl.
-alex
Posted by AkersMinis at 6:38 PM No comments: