Greetings fellow bloggers and readers; as the title says this is my review from the Da Boyz indy GT that I returned from last late last night. Normally I would sit down and show you all a bunch of pictures of some cool armies and ideas that I saw while I was there, and then talk about the winners etc, but saddly this post won't be that kind of one as this was disapointingly the worst event I have ever been too. Here is the break down that lead too that determination.

Venue: The event was held in "The Armoury" in Rochester NY and the location though large and open but did not live up to the hype that the organizer lead us to believe about it. My friend and I were both told that the venue had a restaurant attached too it. What this apparently meant was the piss poor bar, that was overpriced and had nothing but well drinks and cheap beer, was grilling burgers and fries and selling to us. We ended up at wendys and don't get me started into the service on that place. Another major problem with the venue was that due to the size of the location it was either too hot or too cold. There was no comfortable medium and this really made for a misserable time alone.

Organization: Normally if you put out a shedule you stick by it and that works for me. The Fantasy side was on the nose but saddly I was playing 40k and this lead too tons of problems. We were told too arrive at 830am on both days and we would be rolling dice by 930am.....never happened on both days and all this did was fling us into further confusion when it came too grabbing meals etc. The organizers would tell us we would start our next round at 1 even though we just ended at 1230. Ok so I know we have no time too run out and get food, so the problem with this is that would wouldn't start till 1:45pm because they couldn't get there software that did the pairings too work, or the person inputing the data was too slow. Furthermore we ended up playing 4 games on the first day and two on the second. The problem with this is technically that is 10hours  on the first day, and that would have been fine if we started early but adding in the breaks etc we didn't get out of there till after 10pm and we were told we had too be there the next morning at 8am.

Judges: This was my biggest problem for the event because these guys were just awfull. For starters my games 5 was against a 15 year old kid. Now I am a mentor too teenagers and have no issues with children, teens whatever playing and often go into it with a little more give to the game as I know a lot of players are more pricks about it. During the game there was blatant cheating and I started calling my opponent on it, but one of the judges who knew the kid was a local, came up and started calling against me ever step of the way. For example: I took down one of his vehicles with my stormraven, I then used the machine spirit, as the rules clearly state, and choose too fire at a different target. The judge would not allow me too do this stating "you can't split fire it's all at once". IT"S IN THE RULES YOU TWIT!!!!!!! This was only the beginning of many such calls like it. I don't get angry during games but on this one I just got to the "whatever point". Other times during the event I would ask simple questions about time, location, minor rules on the scenarios and the judges would either start talking and walk away, say they have no clue, or tell me to figure it out for myself because they didn't care. Judges are there too help run a event but when I see them having no clue it begs too wonder what the hell they are doing.

Scenarios: This is the second worst part as the designer tried too add some flair....fail. The judges couldn't even answer questions on the scenarios, and before every game they would have too call the 40k side over too them too try and explain typos. The objectives were unclear and favored the locals who know the ways too play the game objectives.

Comp: This is a contraversal issue for many, and I personally have no issue with comp at a tourney... if it's done right. Initially we had a rubric we had too go off of that was out of 80, I personally score 70 pts (I took a untooled pure close combat falchions gk army). After this initially submitted rubric that we knew what our score would be the judges would grant up too an additional 30 points of comp. The problem was this was a blind comp decision and they refused too even state how they graded it. I personally recieved an additional 10 points, while another grey knight player took 30 for a full 110pts. He was a local....hrmmmmm but when I asked one of the judges he argued with me saying no GK player recieved max comp. I offered to show him on the list they posted but he refused to look and keep telling me I was wrong. The judges also refused when asked to at least explain to us how they graded the blind comp portion. This pissed a lot of players off and there was many grumbles.

Event prizes: Now when you go to a GT you go because it is something far bigger and grander then a local rogue trader. A weekend will often come in around 1k in overall costs too get out there, build your army etc etc so that is why you want it too be a cut above the rest in prizes and tropheys. Well the event had tons of prizes but almost zero trophies. More too the point they ran out of there certificates too the people who had won as one of my friends won best table and he got a few cheap scenery pieces. If I wanted to compete for product I would have saved my money and gone too Battleground Games as they put on some amazing rogue traders where you can win hundreds in product, but GTs we are paying for tropheys or plaques but namely something more then just product.

Overall review: I appriciate you all reading this long winded post but saddly there was no way to make it any shorter. If there was one issue I would chalk that too just bad luck..it happens heck even two I would but when I can find major problems in each aspect of the tourney then there is honestly something majorly wrong. I for one will not ever be returning too this event and that disapoints me as it was 5 years since I did a 40k singles GT and I was stoked for it. I went out of my way too sculpt and cast a purity seal for my army list, build a army full of major conversions and go balls too the wall to go all out. I didn't care if I won anything I just wanted too have a blast. Saddly for the first time I feel like I wasted my time, and money and honestly am really lacking the desire too even play anymore because events like this just destroys your desire for the game. Even several of my friends told me this event made them just want too sell off there GW because it just wasn't fun. So I am sure this negative post will cause some controversy and it sucks because I have tons of pictures I wanted too show and going into it I was really excited but now I don't even know if I care anymore about 40k GT's. Adepticon is a blast but I usually play WAB there so that is out of the question.
Posted by AkersMinis at 6:53 AM 3 comments:

DA Boyz GT is only a few days away!

Granted I do not have my usual strand of strong anticipation as I do for Adepticon (I mean who wouldn't for adepticon) but I am still rather nervous as this is the first indy 40k GT I have actually done since 2006!!!!!! I was signed up for one two years ago at adepticon but I fell horribly ill and ended up catching the early flight home. In the words of my friend Joe Orteza " I looked like Nurgles rot!". Anyways I have been plowing away at the army, display board, and army list....wait army list? For those who will face off against me they will recieve my list as a purity seal that I sculpted on a 60mm round real quick and attached some parchment too. I felt it addes a little bit of fun to the whole deal and to thank my caster (who is also my ride to the event) I sculpted him one too for his nurgle. 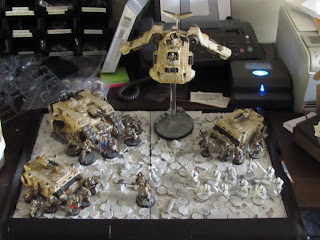 Here's a little overview show of the army as it stands. I am working on the squad to the lower front right and the brotherhood champion and should be finished tues night. In the mean time I also will have too paint the xboard that I sanded down and put all of the hex stones ( and other stuff) on as it is too mimic the dragonforge bases of the lost empires. Jeff Wilhelm being the amazing friend he is made me a master mould too create the hexes from and from there my casting mate did up around 340. Jeff believed it would take 500 and I thought he was right..Had I covered every inch in it well maybe but I didn't because it is a ruined temple. I can use this for my Dark Eldar, and Macedonians as it all fits very easily! 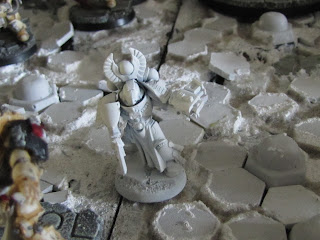 The brotherhood Champion was a fairly easy conversion/ kit bash. I thought about sculpting it and so forth further too really set him apart but time is not on my side. 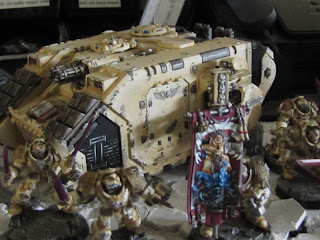 A little side shot of "La Fontaine" or the land raider for those of you not in the know I guess. 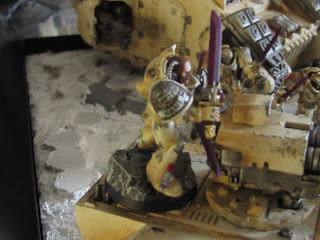 Here's my best friend Hans riding my wife...ya I did it people! 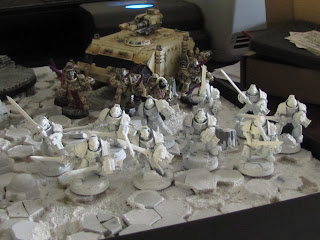 The final squad (now several layers in on paint). This is my only mixed squad in terms of weapons as I needed the points for other things. Well there you have it people. I will get some final shots of everything (seals and all) on Thurday at the hotel but until then I hope you enjoyed the post and as always keep painting.
-Alex
Posted by AkersMinis at 4:13 PM No comments: