The Road too Da Boyz GT

Allllll righty then, well another few weeks and a few more models painted for the Da Boyz GT that will be at the end of Oct. As such I have been somewhat hard at work on these grey knights. Overall the work on them is easy and requires very little challenge on my part but if you get too see them in person they are far better then the pictures honestly. The lighter colors and lack of heavy contrast does not play well for photography but in person these are a delight and hopefully will do well in scoring at the DA Boyz for painting. After the GK's I am going too break my rule again (of not painting armies) and start work on a heavily converted Dark Eldar army for the Saint Valentines day Massacre in Media Penn. From there it's Macedonians for Adepticon then onto the demon progects for next year. In between stuff here and there but overall that's the shedule. Anyways onto the pics. First off we have the converted Librarian who is teh HQ for the army.  Not a ton down sculpting wise minus I replaces parts of his arms and threw on some Dragonforge coils. All in all fun model:

Next up we have the first squad. Now I know they have no backpacks but for my own sanity I always do those at the very end of the army. So I will be doing 18 back packs at once upon completion of everything else.

Yes I know his barrel drillings off line.

Yes the eyes are suppossed too look a litte spilled over as when you see it up close it gives a radiating light source look. Next up the first four termies:

The one with the read swords in the squads is always the squad leader since he is master crafted. It was a easy way of setting him apart. Finally a rear shot of one of the termies.

Well there you have it for now. Still on the list for the army is two troop squads like the one up top, a landraider reedeemer, and a dreadknight. I hope you all enjoy this sneak peaks and just wait as even these models aren't done. BTW if anyone is wondering the bases are from Dragonforge.com so go check them out. I garuntee you won't be disapointed!
Until then keep painting people and have a great weekend.
-Alex

Posted by AkersMinis at 2:41 PM No comments:

So let me start off by saying that this was the first ever ard'boys event that I ever played in. In the past I have always looked at this event with distaste and annoyance as it was so counter productive I felt too the hobby. I had always felt that a event solely based off battlepoint and not theme,sports, or painting was a bad idea. After seeing some negative gamers in my past I pictured these too be the type of people who would come out with the most disgusting lists and be other pricks. Let me just say that this blogger was very wrong!

I went with the sole plan to learn the GK's as facing off against people you normally wouldn't is a great way too really learn how too play an army. I planned (or more honestly figured) that I would loose all three games because I knew little about the grey knights play style or really the confidence at playing the army. My first game was against a Demons army...WOOT!!!!..ya not so much. Was his a tooled army as I had always thought I would face in Ard'boys, not in the least. Honestly he had a great play on the lists and was extremely well balanced. The individual was nice and we helped each other through the game and just had a good ole fashioned time. In the end "0" points as I was massacred but hey I learned a lot. Next up I got too play against a dark eldar army. I stole the initiave and surely this guy would be the dick I had envisioned, nope. He had a fun army lots of flying vehicle goodnew (probably close too $600 buck worth if not more) and was a very nice guy. I picked up some info on the dark eldar (something I have been drooling over painting for years) and walked out with...you guessed it "0" points but a tons more knowledge.

Finally I faced off against a terminator grey knights army..here's the dick right? No, not in the least in fact the game was only 45minutes but was jokes and laughs and just good gaming fun. Just as similiar as my second game I had a great first turn then fell apart. In the end I walked out with "1" point...drat!!!! Damn point modifiers stated if your opponent didn't have a fast attack choice you won the battle point no matter what. This meant I did not reach my goal of "0" points in a tourney. Granted I wasn't actually shooting for that but I knew I wasn't going too win the thing or even place after round two so why not go for broke. So what's the whole point of this as oppossed too showing you all some of my recent painting work well simple, don't ever place a sterotypes on something because you never know what will happen. It was a blast honestly and I look forward too next years (though this time I play too win :)_ ). It was a great store, great people and a great day.
Posted by AkersMinis at 8:51 PM No comments:

Grey Knights on the Horizon!!!!!

Greetings one and all and welcome back too my blog!!! Now I read something on FTW a while back that says I should never apologize for not posting as we all have real lives and damn it I agree. Things have been nuts with Battleroad fixing some MAJOR mistakes of now FORMER!!!!!! employees. Saddly this has pulled all of my attention and due too the significant losses one person caused my company has forced me too look for a more perminate IT job again. In the past I was doing well with this company bringing it up too  250k a year business (95% off ebay bits sales so that tells you how much work I have been doing). Saddly my business will no longer be focused solely on ebay as I am branching out quite a bit more. As we speak the first sets of my bits heads are being sculpted and in the next few months you will begin too see TONS of conversion bits comming out directly from Battleroad Games. I am very excited and think all of you will enjoy the final product. Jeff Wilhelm from Dragonforge is too be blamed for this as he convinced me it was a better way too steer my conpany. Now without further adu onward too the grey knights :)_.

So their are a few armies that I utterly love and will always play when it comes too GW. The first is hands down Slaanesh anything, the second is Ogres ( I just love them beyond belief), the third and forth are grey knights and dark eldar (and skaven but don't tell anyone). Now the reason I love this assortment is first and foremost the backrounds and second their close combat abilities. When it comes too my games I love too get in the thick of the fighting quickly and these are some great armies too. As such though I have been collecting some grey knights and will have a 2500pts army built soon for the ard boys though most likely won't be completed painting wise for another week or two after. All told I usually spend between 40-60 hours on an army as an airbrush is a wonderfull thing people!!!  Anyways for now I have the first of my razorbacks too show you all today and sticking with my tradition I have named it after one of my friends. The Carasas is named after a former mate of mine from my GW days (hooray redshirts!!!) and he really helped me through some tought times. As such I thought it only right too name this model after him. 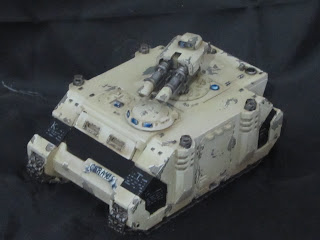 Now I know some of you are probably thinking "WTF it's not Silver!!!", and nor will any of my models ever be for the grey knights. I love true metallics but after a couple of practice models just couldn't get it how I wanted. So knowing I loved this color it seemed a good choice. Now this model was painted then I found I didn't like how I did it so I stripped it and laid down a grey that I would use for the battle damage. A little bit (or a lot) of the arbeitlung (or something of that name) liquid mask and then too the airbrush. The outcome I actually liked which for me never happens. 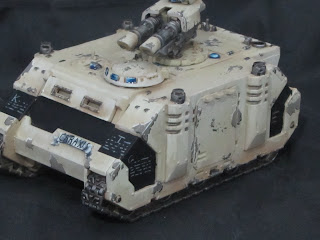 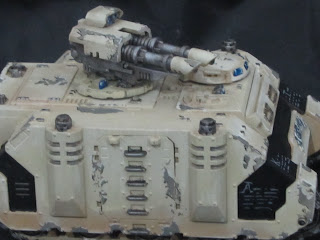 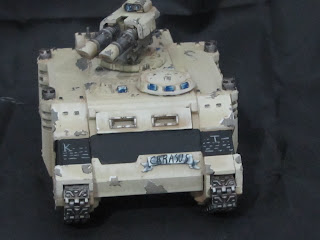 And the front!! Now origonally I was going too have the turret be a burgundy red as the color would have offet nicely... it didn't lets leave it at that. I need too work a little more on my freehand but the weathering is set too the army. I thought about using some of my powders from secret weapons but decided too save them for other things as I am just looking for a overall nice army. Anyways I will have the pics of the squad up either later this week or next, then onto the dreadknight and back too squads. Until then keep painting and too Jordon "You ma boy blue...you ma boy!!!". BTW the dreadknight will be named Le'Fontaine.
Posted by AkersMinis at 4:52 PM 3 comments: