So I have been extremely busy as of late painting historicals from the SYW to Etruscans to Cowboys... OH MY!!!(don't forget Samurai soon too), and let me say I have had a blast. Very different then GW models and tons of fun. Well to kick off I am going to Adepticon this year, and the little wife will be playing in the WAB team tourney with me ( she's just thrilled:) ) so I need to knock out a 1000pts army for her for the event as I will be running samurai. Well this gave me a reason to purchase more of the Gorgon Studios Etruscans that I love ( WOOT WOOT) and finally sit down and start painting them. I decided to do the cavalry and one of the two phalanxes first. This way half of the force is complete. As such I learned a couple of things as I made some major newb mistakes while working on the cavalry but thanks to the models they still came out ok so I am not too upset. I plan on increasing to two cavalry units by 2012  though so I will have another go around at least:). Anyways here's those pics: 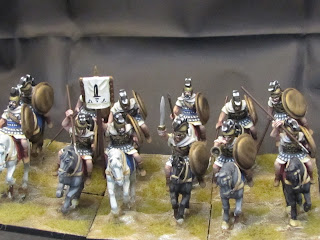 Here's a quick group shot as you see. I placed them on bases of two because I won't just be using these for WAB but for future fights against early romans. 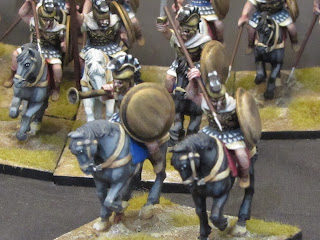 Here's a side shot. I intended to use the transfer for the shields but to say the least they are not too easy to work with so I just left it as is for now. I may come back later if I have time. 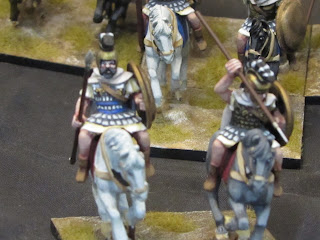 Here's a shot of the multiple armor types they have. These models are great, and had I painted the horses first, they probably would have looked better but either way they were great casts, and fun to work with. I kept the horses simple... as well I hate painting horses what can I say.

Now onto the Mindens: if you look in my blog role you will see the Minden progect which is the baby progect of one Frank Hammond. He started this progect as a way to build excellent quality SYW models, and believe me he and his sculptor Richard Ansell delivered!!! Saddly Frank only takes on a limited number of clients as he doens't want to be in the industry again but I count myself fortunate that I get to be one of these exclusive people(thanks uncle Jim). Right now I am slowly working on the Hannoverian Brigade for the Battle of Fontenoy, but will add 2-3 more British brigades over the next year or two as well as a cavalry brigade. My plan is for a 2012 battle of fontenoy at the Seven Years War convention in South Bend. Anyways here's the pics so enjoy. 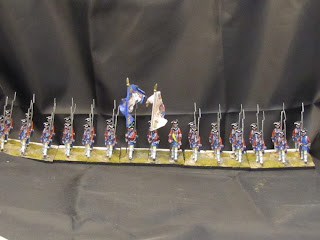 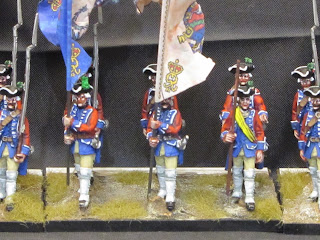 Command shot. I still need to add the tags to denot the Reg't on the back of the base and the officers weapon top as I replaced them with brass rods, but otherwise these are done. The flags came from Flag Dude.com and they are awsome. I fully recomend him if you don't have any as he knows his stuff, and the prices are great. Technically this was the second battalion I painted but the first did not stand up to my expectations so they went into the simple green to be stripped, and will be painted next.

Well that's it for now people. I hope you enjoy and as always C&C welcome no matter good or bad. As always Keep Painting and see you next time fellow bloggers.
-Alex
Posted by AkersMinis at 6:27 PM